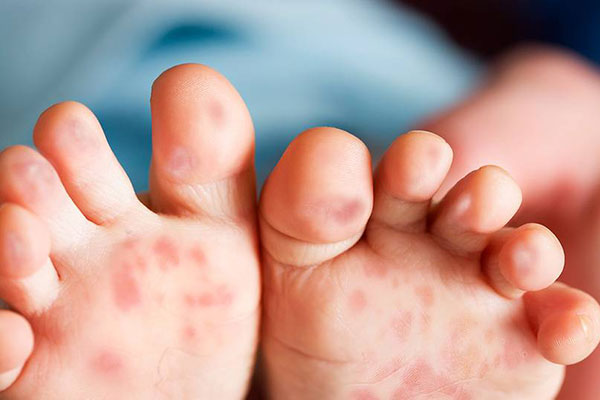 Hand Foot Mouth Disease (HFMD) is a highly contagious infectious disease caused by Coxsackie virus (A16) and Enterovirus 71 (EV71). In Việt Nam, HFMD occurs throughout the year, but the peak season is from March until May and September to December. Children can get HFMD at all ages but children below 3 years are more susceptible, as they have not developed immunity against the virus.

Is HFMD the same disease as foot-and-mouth disease in animals?

Despite similar names, these two diseases are completely unrelated and caused by different viruses. Humans cannot get the animal disease and animals cannot get HFMD.

What are the signs and symptoms?

The incubation period of HFMD is generally between three to seven days. Initial symptoms are fever, loss of appetite, fatigue and sore throat. Sores will form in the mouth, and/or on the hands, feet, knees, elbows, buttocks, and sometimes the genitals. Sores may look like small spots, bumps or blisters. Sores in the mouth can make eating and swallowing quite painful and consequently your child may refuse to eat and drink. First flat red or scaly patches will appear on the skin, which then develop into non-itchy blisters and will remain for about seven days.

How dangerous is HFMD?

HFMD caused by Coxsackie virus (A16) is usually mild and children will recover spontaneously after seven to 10 days. Sometimes the disease can last a bit longer but severe complications are rare. Mouth sores may cause children to refuse to eat and drink, resulting in dehydration, fatigue and low blood sugar. If that is the case the child needs to be admitted to the hospital to receive fluids and food intravenously (through a tube directly into the blood stream).

HFMD caused by EV71 can be more serious with sometimes severe complications. The most common ones are neurological (aseptic meningitis, encephalitis, paralysis …), but fortunately these are rare.

How is HFMD transmitted?

The viruses can be found in the nasal secretions, saliva, fluid in the sores, and stools. HFMD spreads through close contact, coughing and sneezing, or touching objects and surfaces that have been contaminated with the virus. A person is most contagious during the first week after the onset of symptoms. After recovery the virus can persist in the body for weeks meaning that a child can still spread the disease. Other children may not show any symptoms but they may still transmit the virus to others.

Is there a test for HFMD?

Yes, but it is not usually necessary. Your doctor will normally be able to tell you straight away by examining your child.

What is the treatment?

There is no specific treatment for HFMD. Relieve fever and pain with paracetamol ibuprofen. NEVER use aspirin for a child younger than 18 years. In children, aspirin can cause a serious condition called Reye syndrome.

It is important your child gets enough fluids and nutrition to prevent dehydration and hypoglycemia. If you are breastfeeding, you need to increase the frequency. In older children avoid foods that cause pain. These include acidic foods like orange, lemon and most other fruit juices, spicy foods and hard foods. You should rather give them soft foods such as porridge, milk and ice-cream.

When to see a doctor?

· Take your child to see the pediatrician if you suspect he has HFMD.

· The child will have to be re-examined every two days during the first seven to 10 days of HFMD.

· Children with fever should have a follow-up visit every day until they are fever-free for at least 48 hours.

· If you cannot care for your child or have other small children at home, it is better to bring your child to the hospital.

Go to a hospital immediately if your child shows one of the following:

· Seizures or loss of consciousness.

Can HFMD be prevented?

There are no vaccines against HFMD but some preventative measures may reduce your child’s risk of catching it:

· Wash hands frequently with soap and water, especially after using the toilet, changing diapers or being in contact with saliva. Teach your child good hygiene methods.

· Disinfect toys, utensils, floors and other surfaces your child may touch, first with soap and water, then with a diluted solution of household bleach and water.

· Isolate your sick child at home. Because HFMD is highly contagious, keep children with HFMD at home for the first 10-14 days of illness or until sores have healed. Avoid close contact with other children in the same household (sharing food from the same tray, hugging, etc).

* Dr Nguyễn Trung Hà, MD, M.Sc, is the Head of Pediatrics at Hanoi French Hospital with over 20 years of experience in treating children.

This site uses Akismet to reduce spam. Learn how your comment data is processed.